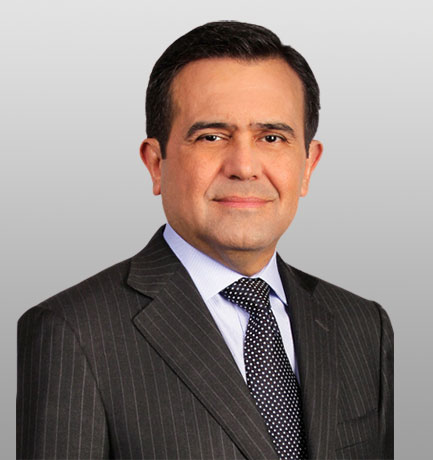 For more than three decades, he served in a wide range of leading positions in the public sector, in charge of international trade, trade negotiations, economic competition, industrial policy, and regulatory improvement, among others.

He began his career as Chief Economist of the Brazil Section and Associate Economist in the Fiscal Affairs Department at the International Monetary Fund (IMF). Afterward, he was appointed Director of the North American Free Trade Agreement Affairs Office from Mexico in Washington.

He worked extensively in the public sector at the local and federal levels, as Chief Officer at the Ministry of Foreign Affairs, Undersecretary of Tourism Development, Chief of Staff for the Governor of the State of Nuevo Leon, among others. In the legislative branch, he served twice as a federal congressman, and once as a local representative, in the State of Nuevo Leon.

In December 2012, he was appointed Mexico’s Minister of Economy, a position from which he led the design and implementation of the industrial and trade policies, the strategies for supporting SMEs, mining promotion and development, regulatory improvement, industrial property, and consumer protection.

He led many trade negotiations, such as the modernization of the United States-Mexico-Canada Agreement (USMCA, formerly NAFTA) and the Free Trade Agreement between Mexico and the European Union, as well as the negotiation of the Comprehensive and Progressive Trans-Pacific Partnership (CPTPP) and the Pacific Alliance.